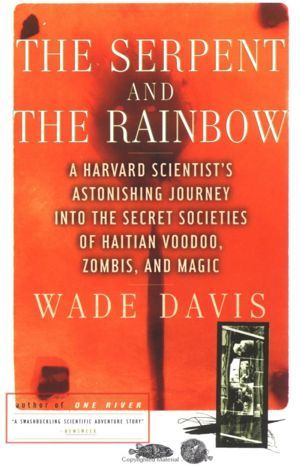 SERPENT AND THE RAINBOW

In April 1982, ethnobotanist Wade Davis arrived in Haiti to investigate two documented cases of zombis -- people who had reappeared in Haitian society years after they had been officially declared dead and had been buried. Drawn into a netherworld of rituals and celebrations, Davis penetrated the vodoun mystique deeply enough to place zombification in its proper context within vodoun culture. In the course of his investigation, Davis came to realize that the story of vodoun is the history of Haiti -- from the African origins of its people to the successful Haitian independence movement, down to the present day, where vodoun culture is, in effect, the government of Haiti's countryside.

The Serpent and the Rainbow combines anthropological investigation with a remarkable personal adventure to illuminate and finally explain a phenomenon that has long fascinated Americans.

"Mr. Davis's book should become a classic in the literature of scientific adventure. He reports his adventures brilliantly, conjuring up characters and settings vivdly and creatiing sinister suspense with the skill of an accomplished novelist. " - Atlantic Monthly

"You might call this Indiana Jones Goes Spooking. And spooky it is." - Playboy

"This first hand account reads like inspired fiction. You can't help but sink back in your chair and gleefully drink in the incredible journey that unfolds". - Glamour

"The rich flavor in this strange book is like that in the early carlos Castaneda." - People

"It is a remarkable story. I was fascinated by it." - Michael Chrichton